Element 47, the new restaurant at The Little Nell, is just as much a feast for the eyes as the taste buds. Here’s a look at the artists and their work that are exhibited in the space.

Paula Crown received her MFA in Painting and Drawing from the School of the Art Institute of Chicago in 2012, and earned an AB degree in Management Science Magna Cum Laude from Duke University in 1980. During the past several years, Ms. Crown has facilitated design and art collaborations with the artist Jaume Plensa, landscape architect Mikyoung Kim, photographer Walter Niedermayr, the Aspen Ski Company and Aspen Art Museum Director Heidi Zuckerman Jacobson, and Factum Arte founder Adam Lowe. Currently she is working on a sculpture proposal with Theaster Gates and planning her Chicago based studio with architect Jeane Gang. She is preparing for an exhibit of her own work at the Aspen Institute in the summer of 2013 with the assistance of curator and consultant Christopher Byrne.

Ms. Crown’s portfolio over the course of four decades has been defined by her relentless advocacy for initiatives in education, children’s health, clean energy, environmentally sustainable business practices, as well as the arts. Originally from Marblehead, Massachusetts – where she started in an adult painting studio at age nine — she now lives in Chicago and Aspen. She and her husband have four children. 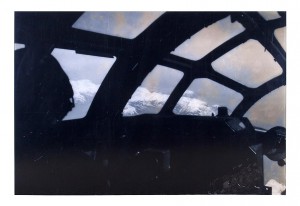 Michelle Grabner is a prolific maker of art, exhibitions, critical essays, and many other things. Grabner investigates concepts of work and labor, as well as the aesthetics and social-dynamics of the domestic sphere. Her visual language is based in repetition, pattern, and indexical systems of mark making which verge on abstraction. Much of Grabner’s work playfully balances the tension between the sweetness of color, pattern, and domestic references with the rigid, lofty posturing of Modernist Abstraction. In fact, she often refers to the “optical bounce” viewers might encounter in seeing these vibrant works.

Grabner is an avid collaborator, facilitator, teacher, producer and mentor. She is currently a Professor and Department Chair at The School of the Art Institute of Chicago, visiting Professor at Yale University, and — with her husband Brad Killam — runs The Suburban (est. 1999) in Oak Park, Illinois as well as the Poor Farm (est. 2008) in Waupaca County, Wisconsin. She has been selected to co-curate the 2014 Whitney Biennial.

Her work at Element 47, A Series of Three Untitled Works, is silverpoint on panel. 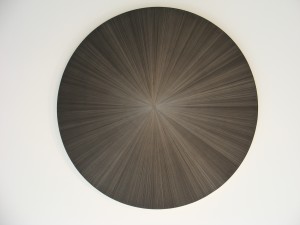 His untitled work at Element 47 is paint on carpet.

Cameron Martin is an artist who lives in Brooklyn, New York. His paintings and drawings have been shown internationally. In addition to solo shows at galleries in the United States, Japan and Europe, he has had one-person exhibitions at the Saint Louis Art Museum and the Philbrook Museum of Art in Tulsa, Oklahoma. He gas participated in numerous group exhibitions, including the 2004 Whitney Biennial, Short Stories, at the Henry Art Gallery, and In Monet’s Garden, at the Columbus Museum of Art, which traveled to the Musée Marmottan, Paris, France. He has received several awards including a Joan Mitchell Foundation Grant in 2008 and a Guggenheim Fellowship in 2010. His work is in many museum collections, including the Albright Knox Art Gallery, the Cleveland Museum of Art, the Seattle Art Museum, and the Whitney Museum of American Art.

His work at Element 47, Trees (Bracket) is acrylic on canvas. 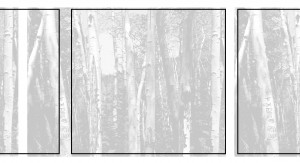 Angel Otero was born in 1981 in Santurce, Puerto Rico. Otero is best known for his process-based paintings and deconstructive porcelain and steel sculpture. While early works have been influenced by memories based on his early life in his native Puerto Rico, referencing photographs and other family memorabilia combined with the gestures of 20th century painting, his latest works highlight artistic material and its physicality. Otero has developed a ‘deformation’ approach by first painting on glass and then, once dry, scrapping the paint, as a skin, off the glass and draping and rearranging the material on canvas.  With this process, Otero explores a reconfiguration of both historical and contemporary painting narratives, showcasing the physicality of the material beyond its historical use as an image maker. The paint becomes the subject of the painting. Recent works in sculpture feature hand-manipulated fences with motifs inspired by popular designs used in fencing around homes in Puerto Rico. The manipulated steel fence structures are fired with porcelain and result in accidental aesthetics. The process and act of working with the materials dictates the final aesthetics of the sculpture furthering the artist’s explorations of material and the technicalities inherent to their science. Personal history and art history find a common ground in Otero’s practice, both acting as a genesis to the artist’s explorations of artistic medium.

Otero received his MFA from the School of the Art Institute of Chicago. Recent exhibitions include The Old Lansquenet is Laughing at us at Brand New Gallery in Milan, Italy, New Works: Angel Otero at CAM Raleigh, North Carolina, El Museo’s Sixth Bienal at El Museo del Barrio, Memento, a solo exhibition at Lehmann Maupin Gallery New York, The Dangerous Ability to Fascinate Other People at Kavi Gupta CHICAGO, Misericordia at Prism Gallery Los Angeles, Chicago Cultural Center, Constellations at the Museum of Contemporary Art Chicago, a solo exhibition at ISTANBUL’74, Turkey, and a solo exhibition in India at Gallery Isa, Mumbai. Upcoming shows include The SCAD Museum of Art in Savannah, Georgia and a solo exhibition at Kavi Gupta BERLIN. He is also the recipient of the Leonore Annenberg Fellowship in the Visual Arts. Angel Otero lives and works in Brooklyn, New York.

His untitled work at Element 47 is oil paint and oil paint skins collaged on canvas. 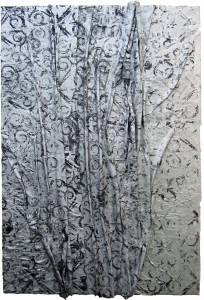 Scott Reeder’s paintings are irreverent parodies with classical references. He mines art history for different styles, providing each work with the context for a new joke. The list of his parodies includes the work of Caravaggio, Picasso, Duchamp, Johns, Rothko, Matisse, Twombly, LeWitt, and others. There are also the uniquely Reeder paintings – the smoking fruit, Christian Calculator, and Symmetrical Pirate. Like these works, Reeder’s Untitled 14 x 25 foot canvas — which occupied the lobby of the Museum of Contemporary Art in Chicago – reveals that the artist is interested in more than mere surface satire. The Spaghetti Series identifies the painter’s interest in the abstract as both a visual experience as well as social value.

His untitled work at Element 47 is enamel on canvas.

Philip Vanderhyden is an artist living and working in New York. Born in Wisconsin in 1978, Vanderhyden earned a BFA in painting from the University of Wisconsin, Madison in 2001 and an MFA from Northwestern University in 2004. Vanderhyden has exhibited extensively nationally. His work has been reviewed in Art in America, Artforum, Artnet and Artslant, among others.

In his most recent work, using graphite dust glazed onto burlap and linen, Vanderhyden creates seemingly abstract fields that demonstrate a marked investment in 20th century modernist painting. Like his earlier work, these paintings offer fleeting resemblances to images that frame and problematize a painting’s seeming openness and transparency; as they allude to, but never fully reveal what one critic has called an ‘inner life.’

His untitled work at Element 47 is oil on burlap. 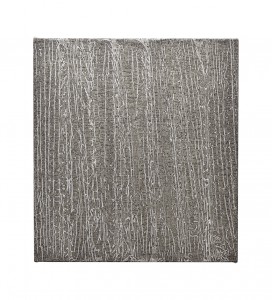 Rafael Vega (1979, Yabucoa, Puerto Rico) lives and works in New York and Puerto Rico. After completing his BS-Industrial Chemistry (2003) and BA-Painting (2007) at the University of Puerto Rico, he received his MFA with a major in Painting and Drawing from the School of the Art Institute of Chicago in 2012.

He had his first solo show at Guided by Invoices Gallery (New York), 2012. During the current year he has participated in group shows in Chicago, among them, De/Re/Un-, No Nation Gallery, Chicago, MFA Thesis Show, SullivanGalleries, Clothes Line, LAWN Gallery. In 2011 he participated in Experience is Never Unattached, Sullivan Galleries, Chicago; in 2010, in the CIRCA 10 International Art Fair, San Juan de Puerto Rico; and in 2009, in the Muestra Nacional de Arte, Instituto de Cultura Puertorriqueña, San Juan Puerto Rico. His work has been included in Rafael Vega: Beyond Literalism an article by Barry Schwabsky, Arte al Dia/International, December, 2012. New American Paintings, No. 99, MFA Annual in 2012 and in Artist 1, Curators 0 by Nicholas Ostoff, F Newsmagazine, September, 2011.

His piece at Element 47, Untitled #4, is acrylic on masonite.

[…] Click here for the artists’ bios and a closer look at their artwork in Element 47. […]