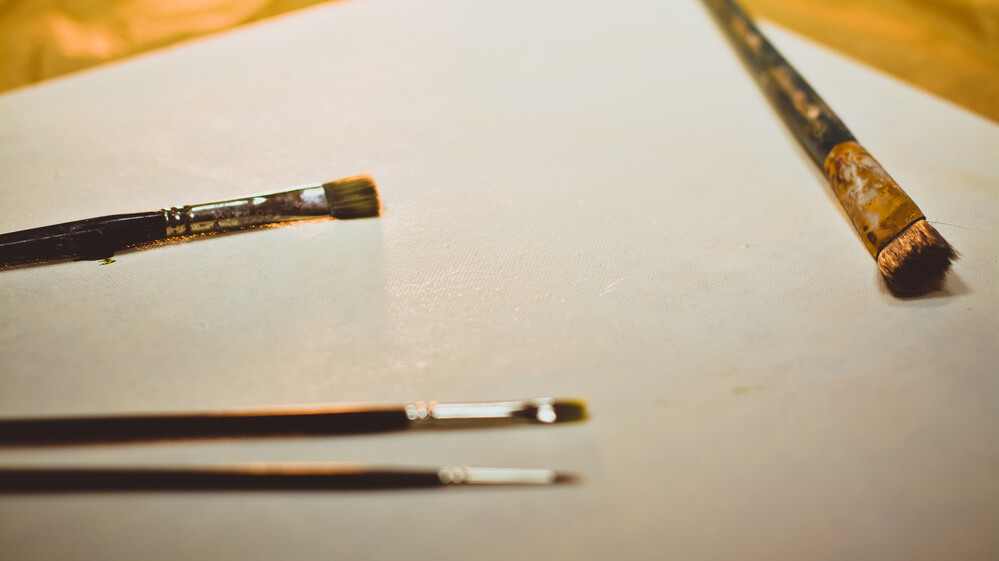 Aspen may be recognized internationally first and foremost as a ski town, but it’s quickly earning a reputation as an arts town, too. That’s fitting, given the percentage of people employed in the arts in Aspen makes it No. 2 in the country per capita, according to data compiled by the U.S. Department of Agriculture’s Economic Research Center. In Pitkin County, 6.1 percent of residents are employed by the arts, well above art epicenters like New York County.

Open either local Aspen newspaper and those percentages are immediately obvious. During the high season, exhibition openings and artist talks are scheduled several days of the week. Most of the 30-plus galleries in downtown Aspen show works by artists from around the world, while institutions like the Red Brick Arts Center, the Aspen Chapel and Basalt’s Art Base regularly feature local artists, as well, along with restaurants and establishments, which hang their work.

From Aspen to Glenwood Springs, artists have long called the Roaring Fork Valley home, and many make their living here. Here are just a few of the artists that call Aspen home, and a handful of the galleries we recommend strolling through, whether as a pre-dinner distraction or an entire afternoon activity.

Sam Harvey and Allegheny Meadows opened their eponymous gallery in 2005, featuring ceramics, sculpture, paintings and works on paper. Originally situated at the base of Aspen Highlands, it’s now located on Hopkins Ave., and their shows and artists change regularly. (You may also know of their Artstream Nomadic Gallery, which is parked in front of the gallery for the Aspen Saturday Market in summer and fall, and travels around.)

A photo posted by Christopher Martin Gallery (@christopher.martin.gallery) on Aug 17, 2016 at 12:21pm PDT

After running a successful gallery in Dallas, Texas, for 20 years, the Christopher Martin Gallery opened an outpost Aspen in 2010, featuring works by the contemporary artist. Martin liked the scene so much here that he moved his studio to the Rocky Mountains and the exhibition space can be found on Cooper Ave. (On display on an exterior wall at Residences at The Little Nell is a large format piece by Martin, which is switched out seasonally. You’ll see this piece facing the gondola building.)

Of course, other illustrious artists are Aspen-based, even if they don’t have a storefront promoting it. Take, for example, Linda Girvin, whose career has evolved from lenticular photographs into abstract combinations of photos and paintings all in her home studio near the base of Smuggler Mountain. Her work is collected around the world and seen locally by appointment.

Dick Carter is another well-known name in the local art scene, having been a driving force behind the inception of what’s now the Aspen Art Museum. An understudy of Herbert Bayer, Carter developed his touch over four decades and most recently released a series called “Mandalas Considered,” which is a nod to his Bauhaus heritage and abstract ideals. His studio is in Basalt along the banks of the Roaring Fork River, and his work can likewise be found at shows throughout the valley or in people’s homes.

One doesn’t have to look hard to find sculptor James Surls’ touch; just drive through Carbondale to take a loop around the roundabout on Highway 133 to see his public artwork in the middle of the traffic circle. “Sewing the Future” features a flower, vase, crystal and needles, which give it its name. Its designed to be viewed from all aspects including its view towards Mount Sopris. Surls’ work can also be found behind the reception desk at Residences at The Little Nell with a wall sculpture made of his trademark stylings using wood and wrought iron.

Studio for Arts and Works 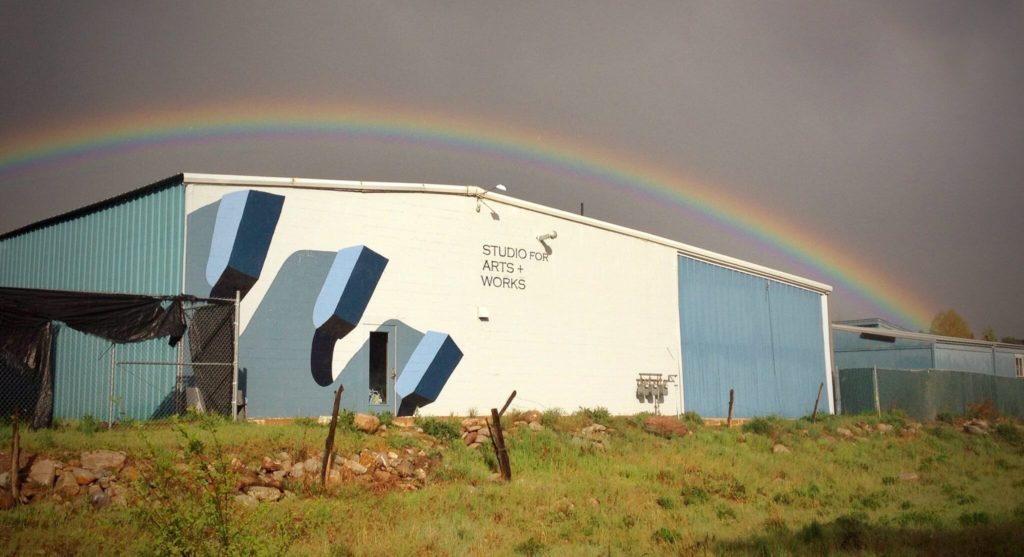 Image courtesy of Studio for Arts and Works

Also in Carbondale is the Studio for Arts and Works (S.A.W.), arguably the best place in the valley to see artists at work. The collaborative space is home to more than 20 artists — jewelers, painters, ceramicists, welders, woodworkers and sculptors — who freely flow in and out of the building working at all hours of the day. Locals like Stanley Bell (with his abstract paintings) and Megan DeNev Wussow (with his jewelry) create pieces here that can be found throughout the country. To keep up with events, view their Facebook page. 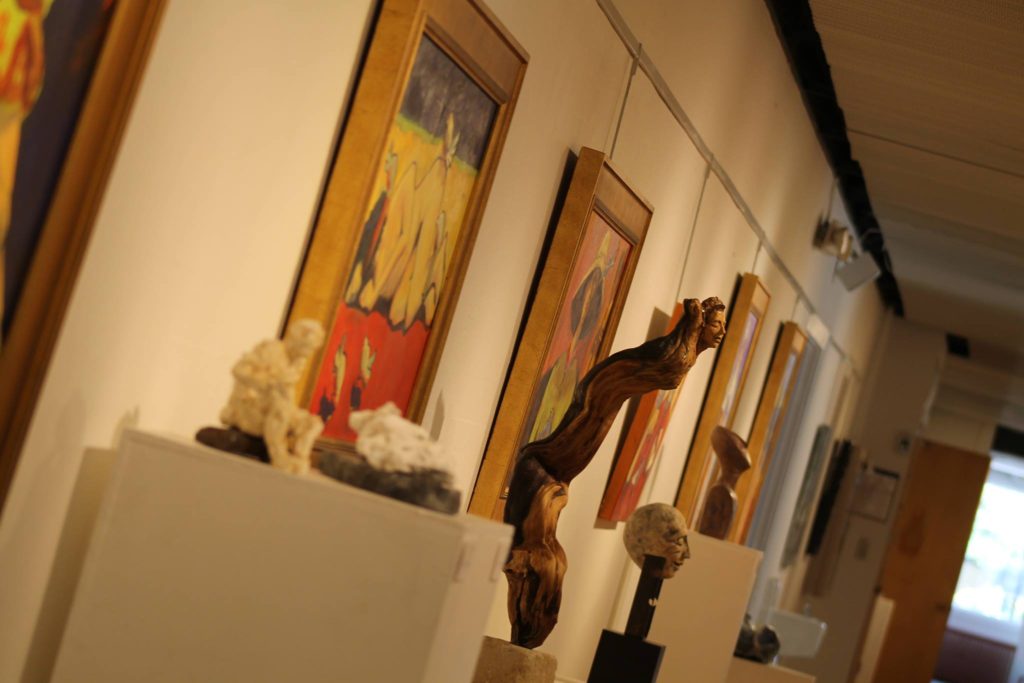 Image courtesy of Red Brick Center for the Arts

Similarly, but on a smaller scale, the Red Brick on Hallam St. in Aspen is home to a few artist studios. To get a feeling for Aspen’s native talent, scan the building’s main hallway on any given day to see an exhibition of local artwork; the nonprofit presents a new show monthly and the public is invited to scope it out any time it’s open.

For those of your staying at The Little Nell or dining with us at element 47, we invite you browse and enjoy the artwork onsite. by notable contemporary artists such as Caio Fonseca, Theaster Gates and Paula Crown – an owner of the hotel, artist herself and curator of the collections on property and at the Aspen Mountain Club.

As for the other extraordinary galleries in, simply ask our concierge for tips. Residents and locals also often have the inside scoop on what’s trending — and according to statistics, have a decent chance of being Aspen artists, too.

Travel Green. How to Join Aspen in Curbing Your Footprint.
2017 James Beard Awards Call for Entries