Each summer, the living wall at The Little Nell is a centerpiece of the courtyard, serving as a stunning vista for hotel and restaurant guests, as well as a popular spot for photo ops. In celebration of our 30th/pearl anniversary, which kicked off on Thanksgiving 2019 and continues through Closing Day 2020, we collaborated with NY-based event designer Jes Gordon to create a winter wall, energizing this space for ski season. Introducing “Starry Night” – An Aspen nighttime sky intended to represent the adventure program at The Nell, and specifically our stargazing adventures. During the day, it is vibrant; at night it glows.The backdrop is enhanced with three-dimensional natural elements to add texture and intrigue.The night sky is represented with pearl accents for the stars.We invite all to visit the winter wall as part of their winter adventures this ski season, and share your photos on Instagram, tagging @thelittlenell #Nell30 @jesgordon. Read below for a Q&A with The Little Nell and Jes Gordon:

THE LITTLE NELL: How did you first learn about the winter wall project at The Little Nell? 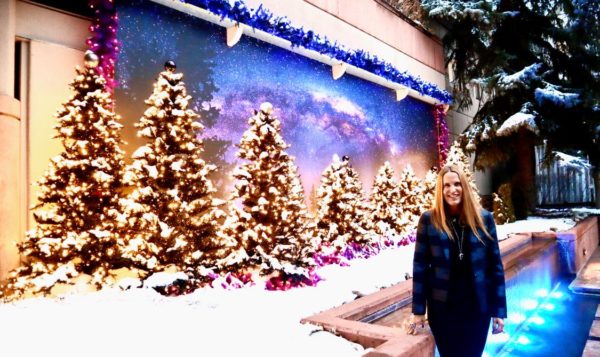 JES: This was basically a happy accident. I was speaking at an industry conference and Melina Chandy from The Little Nell was in attendance and friends with a Colorado-based event producer friend of mine, Aimee Monihan. Well, everyone got to talking and our communication came full circle with the design of a winter wall celebrating The Little Nell’s 30th anniversary. I then became educated on this really wonderful, evolving installation project. For a designer, an empty space right in the middle of an Aspen paradise is very enticing!

NELL: What was it that interested you in collaborating with us on this?
JES: I love what I do; producing and designing events, but I really got my start by designing sets for films, so the idea of creating something that is a bit more permanent, celebratory and that lasts for more than just the duration of an event was a no-brainer.

NELL: How did you decide what designs to propose?
JES: At first, I came up with about ten designs that spanned a lot of mediums including tech heavy neon, video mapping and even hologram art. I finally narrowed it down to three choices – one of which truly celebrated the Aspen nighttime sky. To me, this was the most nostalgic and thought-provoking design that I felt best represented the occasion. I wanted to evoke an emotional response rather than just a visual one, and The Little Nell community was in harmony with this choice. As a kid growing up in New York City, we used to go skiing every winter in Aspen and being able to see a sky full of stars was magical and most memorable to me since I mainly saw buildings and street lights only at home. Stars are what you wish upon; who wouldn’t want a clear vision of them? 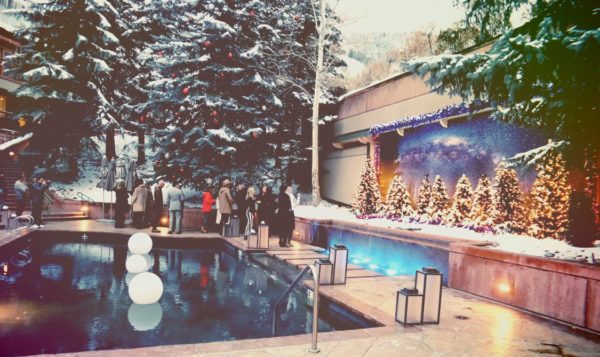 NELL: What were some of the challenges (being outside, length of time it would be up, the elements)?
JES: It was cold! (LOL.) Obviously, the elements really came into play here. We needed to make sure the trees could be weighed down in case of strong winds and that the visual would be able to take on any kind of direct snow, sun etc. I wanted an organic design, but I knew I would need to use non-organic elements for it to last so I struggled with this a bit. I also wanted the piece to include pearls somehow since they are iridescent and they also symbolize the traditional 30th year anniversary gift of pearls. Finally, I wanted the piece to glow; much like a star filled sky.

NELL: What was the creative process and what were the materials used?
JES: The photograph we found was the foundation for the entire piece. Once I chose a visual that I wanted to wish upon and that I could not take my eyes off of, I decided to build the design around it. I wanted the piece to have dimension almost like a “bas relief” so I created a Black Tree Forest that mimicked the tree line in the photo so that they almost grew off of the visual to continue to light up and extend the sky. I chose large pearls to top each tree and I wanted to bring in moody tones that evolve within a night sky such as deep blue and deep violet. An aluminum frame was built so we could install the visual since there was nowhere on the wall to drill into. Then we literally printed the photo onto a material they use to wrap buses and outdoor cars in for signage. The vinyl weather proof photo was then adhered to sheets of metal that were cut into six sections to span the 25-foot wall. I wanted to create a moody, sexy, but serene oasis within that specific area so that guests could gaze at it from their rooms at night. The fog coming from the heated pool really adds to the effect as well, so that was a nice surprise.

NELL: Can you speak to your relationship with Aspen/The Little Nell – any past collaborations or experiences you’d like to share.
JES: After visiting Aspen for many years, The Little Nell was always a place I aspired to be; with family or as a creative collaborator. What I love about this magical place is that it encompasses high quality without being intimidating and it’s also timeless because the overall look and feel is contemporary yet the ambiance is very classical and eclectic. As a designer and producer, places such as The Little Nell don’t come around as often as we hope, because it takes time to create a place that is created through all of the five senses and that is beautifully produced from the inside as much as the outside. It’s far from where I live, but The Little Nell is easily home… I look forward to many more collaborations with this amazing community. I’m so honored to be a part of its 30-year history. 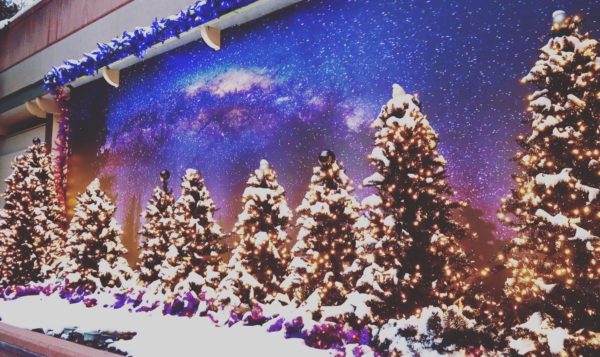 About Jes Gordon
Jes Gordon’s innate eye for color was first noticed at thirteen when she stumbled into the industry as an assistant to a floral designer. By the time Jes was 15, she was already working as a florist. At 25, she was juggling multiple weddings every weekend at Tavern on the Green. And eight months into that job, she transferred her blazing energy and her contact list into her own wedding- and event-planning business in New York.

Cheers to 30 Years! The Nell Turns 30.
Puppy Love at The Little Nell