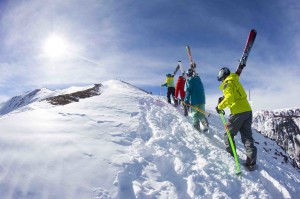 Breath comes in gasps. Thighs burn, while the edges of my skis lie heavily on my shoulder. It’s a powder day in Aspen, and having watched the snow float down in ribbons last night, the plan was already hatched of where to be today.

Not Snowmass, with the most vertical feet in the USA (and a whopping 3,128 acres of terrain). Not chic Aspen Mountain (Ajax to the locals), rising directly from down town, or even Buttermilk, where the gentle terrain and impressive parks (it’s the annual home to the X Games) mean park lovers and beginners leave off-piste terrain for those who like their snow deep – all day.

Nope, it was, as the Americans say, a ‘no brainer’, straight to Aspen Highlands, more specifically, to Highlands Bowl. For any black run lover, this is a rite of Aspen/Snowmass passage. Hiking to the 12,392 feet summit of Highlands Bowl gives the ultimate inbounds backcountry rush (a free snow cat ferries riders part way from the top lift). With 250 acres of accessible expert terrain, including a steepest pitch at 48 degrees, there isn’t another resort in the state that claims as many acres of steep terrain served by one lift. When it opened in 2002, as one skier said, it gave the area “the cherry on the cake”. Because Aspen certainly already had everything else.

Originally a mining town, Aspen Snowmass is as diverse a ski area as you can get. It’s a true ski town, with a permanent population – it’s home to Olympians like Chis Klug, former renegades like Hunter S Thompson (visit his old haunt, the eclectic Woody Creek Tavern) and legends such as Klaus Obermeyer. From the high end of luxury (The five star The Little Nell, anyone?) to living a champagne lifestyle on a beer budget (there are a host of free things to do), there is something for everyone, no matter what your taste.

The four ski areas would take weeks to explore properly, each with their own personality and drawcards.  History lovers will be seduced by the Victorian architecture, art buffs are already set to visit the Shigeru Ban-designed Aspen Art Museum opening later this year, while nature lovers flock to ACES, the Aspen Center for Environmental Studies, and their weekly talks by presenters such as adventurer and big mountain skier (and another local) Chris Davenport.

And we haven’t even discussed the nightlife yet. The Aspen food and bar scene is as hot as the slopes are cool. With over 100 bars and restaurants, from Japanese (including celebrity Nobu Matsuhisa) to American BBQ, French and Farm To Table themes, the gourmet offerings are as cosmopolitan as any capital city. And then sip a classy cocktail or pull up a well worn bar stool at the differing nooks in town.

If there is one truth of the many faces of Aspen Snowmass, is that it’s always changing – a process of evolution including new terrain, new hotels, new drinking holes, more sustainable projects. But like an old friend, the soul stays refreshingly the same.