The Little Nell is asking which local bartender has the skills to be named “Aspen’s Iron Bartender.” Every Sunday  from 5:30-6:30 p.m. in the Terrace Bar, two of the town’s leading bartenders will square off in a round robin competition to determine whose cocktail reigns supreme.

The drink gurus show their stuff, using Grand Marnier as an element in creating delicious concoctions.  Each guest will get one vote with the purchase of a featured cocktail. The bartender with the most votes at the end of the night moves on to the next round. The contest will continue Sundays through March, culminating in a March 26 throw-down with the ultimate victor winning the crown and a trip to “Tales of The Cocktail” in New Orleans to party with some of America’s greatest cocktail creators.

Last week featured the battle of the moustaches, and for Round 2, we have some amazing contenders… these ladies promise to BRING IT!

First up: Stats for Erin Harris

What is your favorite bar tool?

I don’t have a favorite bar tool to name. Each tool has its purpose. To be funny, I would say a cocktail straw because that is what I value the most to ensure the cocktail I am making tastes as it should for my guest.  To be really funny, I would say Jimmy, who owns the bar, as I use him whenever needed to make up for any mistakes we make.

What is your favorite winter cocktail?

Just had an amazing one with Hennessy, hot chocolate,  toasted pecan bitters and whipped cream. This was created by Lindsay Michelle Nader of Harvard & Stone in Los Angeles.

What would your last supper be?

Mussels, mezcal, cheesy potatoes and a medium rare steak at a table with my friends and family

Bellini- fancy, good at starting a party, bubbly and fun! (And a tad sweet)

If we were to buy you a drink what would it be?

I would like to have a ‘Nochita’ of Del Maguey Mezcal. When I visit the small producers of Del Maguey Mezcal it is traditional to have a Mañanita ( a little morning ) when arriving at apalenque (the distillery) to start the day. Typically, it is a small cup of their village mescal, about a half of an ounce. At Jimmy’s, we have created the ‘little evening’ version of the ritual by calling it a Nochita I love all the single village mescals from Del Maguey, but if I had a preference it would be Pechuga. Pechuga is only made once a year in November in the Village of Santa Catarina Minasby Luis Carlos. I have been there to partake in the making of Pechuga, which is what makes it one of my all-time favorites.

Next up: The skinny on Leah Stroup 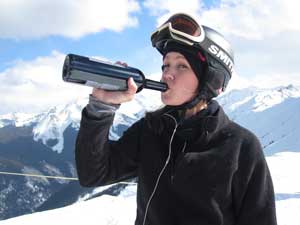 In your mind what is one of the most underrated spirits?

Perhaps triple sec… I recently tried “Combier” – The original 1834 French recipe only available in the U.S. since 2009. Such a bright and interesting mixer or just by itself.

What is your strategy for victory in the Iron Bartender Competition?

What is something you would never be caught drinking?

Lately, a glass of whiskey, preferably one I’ve never tried… It’s comfortable & always has a story & of course gets the job done.

COMMENTS ON "Iron Bartender Round 2"

[…] Last week pitted Leah from J-bar against Erin from Jimmy’s, and Erin advanced in the competition! This week we have Nate Harnish of Pacifica “mix off” against Austin Sessions of 39 Degrees at the Sky Hotel. Here’s the stats: […]