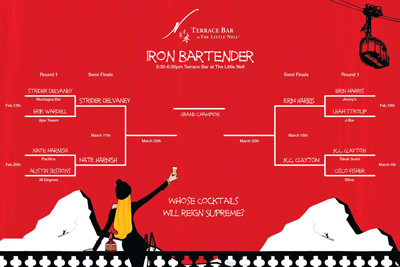 The Little Nell has been asking which local bartender has the skills to be named “Aspen’s Iron Bartender.” Every Sunday  from 5:30-6:30 p.m. in the Terrace Bar, two of the town’s leading bartenders have been squaring off in a round robin competition to determine whose cocktail reigns supreme.

And now we’re down to the next to last battle: Erin Harris from Jimmy’s vs.  K.C. Clayton of Takah Sushi on Sunday, March 18.

K.C. last wowed the crowd with his orange/cream concoction and can usually be found mixing up all sorts of delicious drinks that go great with Takah’s Japanese and Asian menu or on their on.

If Erin was a cocktail, she’d be a Bellini – fancy, good at starting a party, bubbly and fun (and a tad sweet). She vows to make creative and delicious cocktails that others can emulate and share.

We’re in for a good show, folks.

The winner of this round will face Nate Harnish from Pacifica in the finals on March 26.

The drink gurus have been showing their stuff, using Grand Marnier as an element in creating delicious concoctions.  Each guest gets one vote with the purchase of a featured cocktail. The bartender with the most votes at the end of the night moves on to the next round. The contest will culminate in a March 26th throw-down with the ultimate victor winning the crown and a trip to “Tales of The Cocktail” in New Orleans to party with some of America’s greatest cocktail creators.