Ever since he graduated from culinary school at Johnson & Wales in Denver, Matt Padilla has pursued a path towards using farm-fresh ingredients in all of his recipes. After school, his first post was at The Kitchen and Colterra in Boulder, Colo., where he learned to make simple but delicious food, and about the importance of the connection between chef and farmer. His first Sous Chef positions were at Harvest and sister restaurant Zona78 in Tucson, Ariz. He then went on to Copenhagen, spending two months at Noma, a two Michelin star restaurant known for using locally-sourced ingredients to the extreme. Inspired by his experience in Europe, Matthew landed in San Francisco where he worked in some of the Bay area’s best restaurants including Masa’s, Benu, and Quince, eventually becoming Sous Chef at the four star Michael Mina. We then welcomed him with open arms as Chef de Cuisine of element 47. This summer, we caught up with Matt to discuss the direction of the menu, flavors and his overall approach at e47.

Q: What was your overall philosophy in writing e47’s dinner menu this summer and how would you describe your style of cooking?

A: My style is geared towards bringing out the flavors of the ingredients themselves. If you try a dish off the menu and it has corn, for example, you can rest assured the dish is going to taste like delicious corn! I think it’s important to keep the integrity of each dish and respect the ingredient as much as possible. A lot of chefs these days manipulate ingredients so it no longer tastes like the ingredient anymore.

I also like to make sure that I stay true to the comforting flavors that led me to fall in love with food in the first place. Which is probably why I gravitate to pastas and share plates. 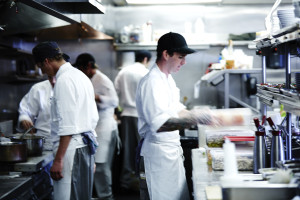 Q: Speak to your background with Italian cuisine and why you chose to develop a specific section for pasta on the summer menu and the three featured dishes?

A: My initial introduction to pasta was at the Kitchen in Boulder. My chef, Ashley Hook, was obsessed with pasta. He taught me the basics and since then it has been a passion of mine. Later in my career, I jumped on an opportunity to work at Quince, known as one of the best Italian restaurants in the country, and their pasta program is incredible. I was able to go in early for work and help the pasta team, which was comprised of five pasta makers that worked every single morning. The exposure there was by far the most influential to my knowledge of pasta.

I’ve also been lucky enough to take an extended trip through Italy. During that visit, we explored Liguria, which is famous for pesto and a walnut ravioli called Pansotti. I also traveled to Bologna and Modena, trying some of the most famous Salumerias and pasta makers in the area such as Bruno e Franco. We ate pastas such as tortellini en brodo, tagliatelle Bolognese, etc.  I finished my trip in Rome, tasting my way through its most famous styles such as bucatini and spaghetti amatriciana.

Q: Do you use the kitchen garden at The Nell? What edible herbs are there or how do you incorporate them?

A: We use it every day! Mainly on our early harvest vegetable salad (violets, marigolds, English lavender, mint, nasturtium, etc), but also on the duck (anise hyssop), and we also use thyme and parsley in multiple recipes. 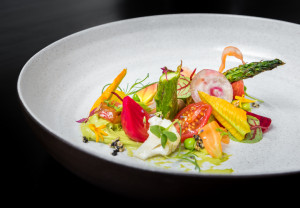 Q: Describe the share plates section and what the response has been?

A:The share plates have really taken off! In my opinion one of the greatest things about dining and eating out is the communal aspect of eating. My family is big on cooking large platters of food and passing it around. My wife and I frequently have dinner parties with co-workers and love making big communal type meals, so I am really excited to do share plates.

Q: Lastly, can you speak to the daily brunch menu introduced this summer and how you chose the five featured breakfast dishes?

A: We chose those dishes because we think they represent what our direction moving forward is. You know we love brunch and came up with the idea to just offer is everyday, why not?! Not many places you can go get pancakes in a five star restaurant on any day of the week at 1 pm. For me, I like the concept because my days off usually fall sometime during the week, so it becomes an accessible brunch not only limited to Sundays.