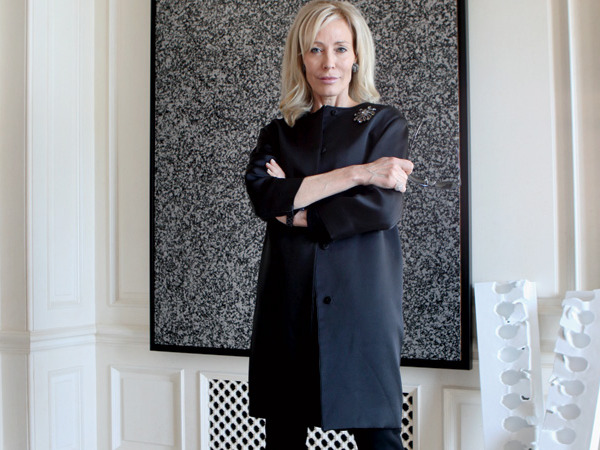 The Little Nell recently opened the doors to its new restaurant, Element 47, where diners feast on more than beautiful dishes featuring Colorado cuisine. They are greeted by original artwork carefully selected by Paula Crown, who owns The Little Nell with her family and is a major contributor to the art world.

An artist herself, Crown also serves on the board of New York’s Museum of Modern Art, the National Council of the Aspen Music Festival and the President’s Committee on the Arts and the Humanities. She graduated from the School of the Art Institute of Chicago with a master’s degree in painting and drawing earlier this year.

Crown and her team, consisting of art consultant Christopher Byrne and architecture firm Bentel & Bentel (2012 James Beard Restaurant Design award-winner), aimed to create a hotel restaurant that was a departure from the expected, which included a focus on carefully curated artwork.

The space also features one of Paula Crown’s works: “Cockpit Side (2012)” located in the private dining room known as The Gallery.

Click here for the artists’ bios and a closer look at their artwork in Element 47.

We asked Paula what it was like working behind the scenes to bring this new restaurant to vivid life. Here’s her glimpse into the process:

What drew you to this project, and how were you involved?

I have been involved in numerous projects at the Aspen Skiing Company over the years, including the Aspen Mountain Club, the ski pro uniforms, and the original design for the Little Nell over 20 years ago. I like the idea of earning my own ski pass.

In the last three years, we totally renovated the rooms and lobby at The Nell with Holly Hunt and refurbished the Aspen Mountain Club with the original designer David Easton. It was time to redesign Montagna to meet the needs of a changing demographics and eating preferences. People like to graze and eat lighter. As restaurateur Danny Meyer said, the classic hotel restaurant is officially dead. It needs its own point of view.

At the recommendation of Nell Managing Director John Speers, we hired Bentel & Bentel from NYC to redesign the restaurant and install it within a three month window (September-November). We took a cue from Danny who has incorporated great art into his award-winning restaurants.

We also hired Christopher Byrne, an art consultant from Dallas and NYC. Chris was the coordinator for the Neidermayer Aspen Series project, which was at the core of our marketing campaign and our ski pass design for the 2010-2012 seasons. Chris is one of those exceptional people who have a combination of intellect and imagination. He understands that good art is multi-contextual.

Who came up with the concept of having large-scale artwork and how does it contribute to the overall feeling of the space?

Almost all of the work was commissioned for Element 47. The the size of each piece became the practical consideration, and we allowed the artists to use their problem-solving skills for the designated walls.

How did you decide what type of art and what artists to feature?

During this past summer Peter Bentel, Chris Byrne, and I visited galleries and artists’ studios and had several conversations about the project and its scope. What we kept returning to was the strength of the faculty and recent graduates from the School of the Art Institute of Chicago. I knew many of these artists, and it became a pleasure to select their work. Hopefully this familiarity creates a sense of cohesiveness for the overall installation.

Do the pieces operate on a single theme or motif, or are they more disparate in nature?

Chris and I worked closely with Peter to provide a sense of the materials that would be used in the interior. We also liked that the artists knew each other personally, adding to the richness of the project. Without prescribing the imagery or materials, it’s interesting to note (in retrospect) that there do seem to be ideas and approaches that overlap. Of special note was Michelle Grabner’s series of silverpoint Tondo paintings. During our conversations, we discovered that the medium she used for her canvases could only be purchased from one source—a mine in Colorado. The name Element 47 is a nod to silver on the periodic table and Aspen’s mining history! (As a side note, Michelle was recently named co-curator of the 2014 Whitney Biennial.)

How would you describe Aspen’s art scene?

The history of the arts in Aspen continues to evolve from its roots with the Ute Indians to the Paepcke Family who believed in the importance of the arts/commerce/culture and the Bauhaus master Herbert Bayer. It continues with the brilliant leadership of Heidi Zuckerman Jacobson at the Aspen Art Museum, Mike Kaplan at the Aspen Skiing Company, Barbara Bloemink at Anderson Ranch, and Damian Woetzel at the Aspen Institute. This list barely scratches the surface of the aesthetic potential of the entire region, and did I mention the skiing?

How do you see your own role in the context of Aspen’s art?

Our family supports institutions and communities in both the profit and non-profit sectors. Over the past several years, our company has partnered with the Aspen Art Museum on Art in Unexpected Places — a project that invites artists to reveal a different context for their work on the slopes. My involvement with The Little Nell and the Aspen Skiing Company has allowed me to engage with artists who connect us across varied geographies. I’m often just the conductor orchestrating all of this astonishing talent. 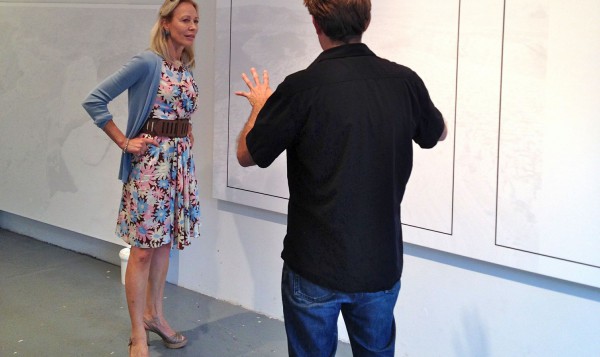 Paula Crown and Cameron Martin in the artist’s Brooklyn studio 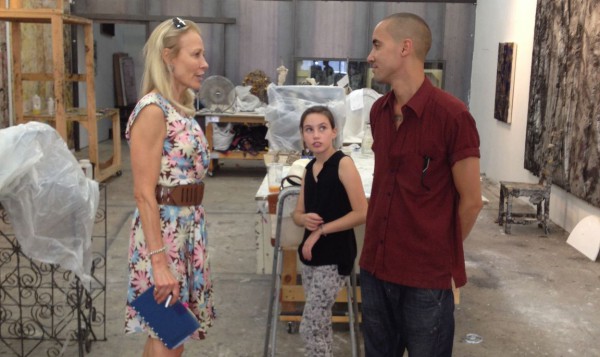 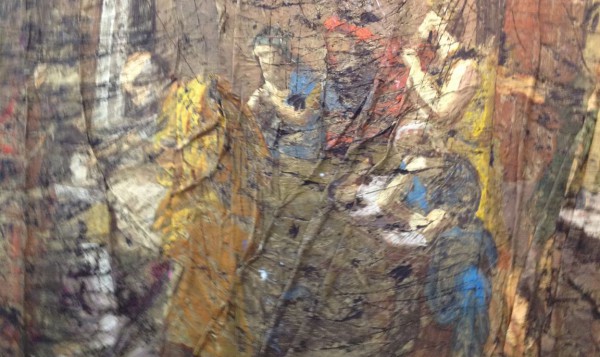 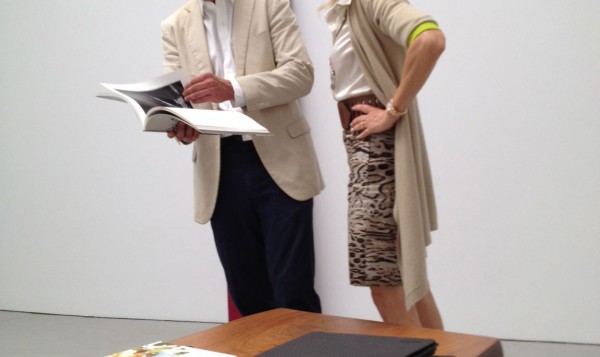 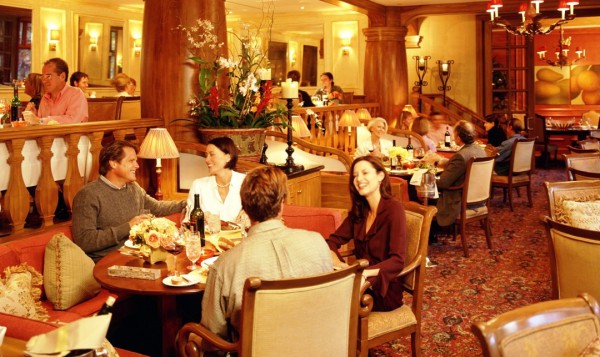 Before element 47, the space was Montagna Restaurant. 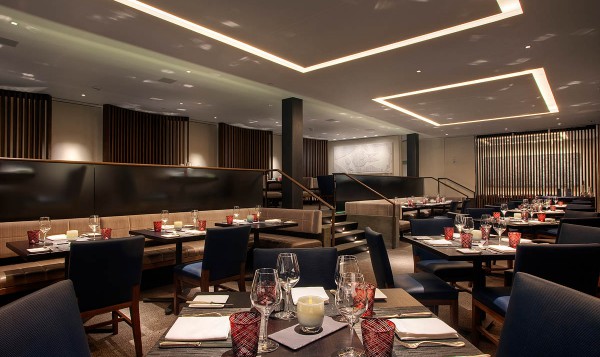 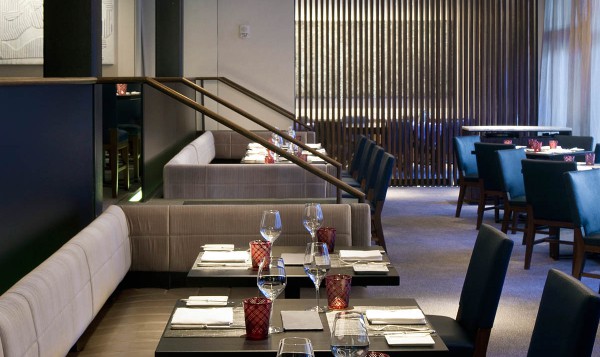 A view of the main dining room at element 47 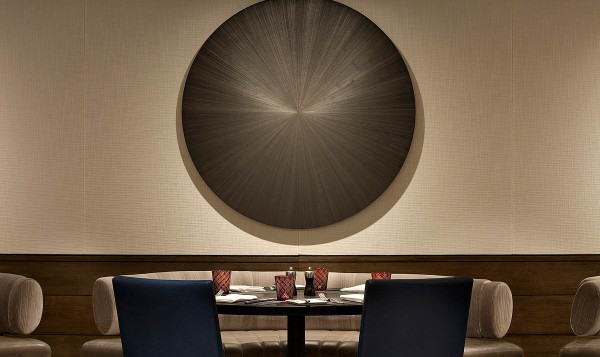 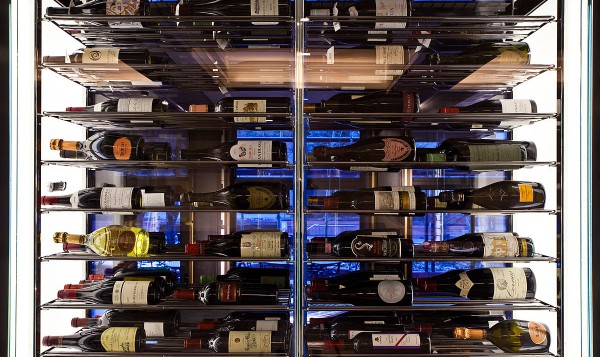 A portion of the “wine wall” at element 47

element 47 opens its doors
And the snow gods smiled…